When Wandsworth Common Station opened in 1869, it was exceedingly proper that ladies and gentlemen have separate waiting areas in which to bide their time for the next train. Over the next 150 years, this space served the ladies of Wandsworth, then later, perhaps the gentlemen too, before eventually becoming a storage bunker for the staff of the various railway companies in charge of the station.

Then in 1998, a chance meeting between a group of artists looking for project space and a railway manager led to the transformation of the derelict waiting room into Platform 1 Gallery, a dynamic artist studio and place for creative collaboration, led by designer Gregory Epps.

In 2005, artist Ema Mano regenerated Platform 1 Gallery again into a public art site with programmes of exhibitions and artist residencies. Since the very beginnings, Platform 1 Gallery continues to operate as it started; it is a creative space encompassing all aspects of making from visual arts, fashion and jewellery, music, photography, and film.

This year, Platform 1 Gallery joins Wandsworth Fringe Arts 2016 for three exhibition projects in visual art and performance: the first is “Fragments and Traces” from artists Kelise Franclemont and Antonia Jackson, followed by “Transcending” from artist Ema Mano Epps with Verica Kovacevska and Norman Mine, and finally, “Fragment” by sculptor Anna Flemming. 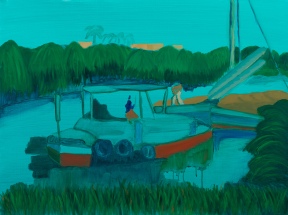 Kelise Franclemont, from ‘Postcards from the Land of No People’, 2015. Image courtesy the artist.

Artists Antonia Jackson and Kelise Franclemont explore memory, travel, and passage of time through paintings, installation, and new media. Throughout each day, along with the exhibition of artworks, Antonia and Kelise will engage visitors in trading memories and creating new ones in an ongoing make-one/take-one souvenir postcard exchange.

Ema Mano Epps shares the explosive colour of inner balance in battle with the chaos of society’s outer inhumane ego. Artist Norman Mine performs a response and Verica Kovacevska holds an online talk from Zurich, presenting ‘The house we grew up in’, the life of three generations. – from Wandsworth Arts Fringe website

Anna Flemming’s recent work is influenced by the practice of constructing artificial ruins as garden ornamentation. Ruins, often taken to signify nature’s triumph over culture, are also intended to be picturesque. Anna has recently been working on a series of artificial rock sculptures…[which] appear to have been affected by natural forces, but have in fact been constructed by hand. Therefore they allude to the natural fragmentation of aesthetics caused by time and its gradual erosion. – from Wandsworth Fringe Website

“Fragments and Traces” – 5 to 8 May 2016 – Artists Antonia Jackson and Kelise Franclemont explore time, memory, and travel through painting, new media, and installation.

“Transcending” – 12 to 15 May 2016 – Artist Ema Mano Epps is joined by guest performers Verica Kovacevska and Norman Mine.

“Fragment” – 19 to 22 May 2016 – Recent works by sculptor Anna Flemming who is “influenced by the practice of constructing artificial ruins as garden ornamentation”.