If there’s an art museum in town, I’ll try to find it! This time it was Everson Museum of Art in Syracuse, NY, which offers a sizeable collection of (mostly) American paintings, sculpture and ceramic arts… and video art, too! Everson also has special exhibitions several times a year; the day I visited “Works on Paper” by Sarah McCoubrey was on. And if art, old, contemporary or otherwise isn’t really your thing, tag along with your arty friend anyway because the building’s architecture by I.M. Pei is something to see.

The little museum with a little bit of everything

In Everson’s collection of over 11,000 pieces of art you’ll find American paintings and sculpture dating from 1700’s to contemporary times, ceramic art works from all over the world and an an extensive collection of video art from the 60’s and 70’s and beyond.

There’s really something for everyone here, from slightly weird Victorian-era religious-themed art (as in “The Peaceable Kingdom” by Edward Hicks, 1840)…

… to interesting juxtapositions such as this trio that spans 150 years, with the stoneware tree-stump vase by Eric Serritella (centre, 2008) situated between two Romantic-style paintings by William Ongley (left, 1880) and George Inness (right, 1849).

Let’s not forget that this is clearly an American museum of art, replete with cowboy statues and portraits of the Great Nation’s VIPs, along with a porcelain tribute to the Declaration of Independence for USA’s bicentennial birthday in 1976, by Italian artist Aldo Falchi. 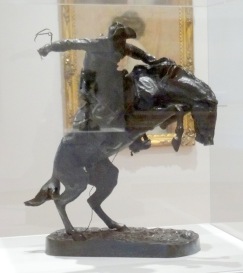 Ceramics are a focal point for Everson; their large revolving exhibition mainly in the lower level includes pieces by international makers such as M. Palaniappan from India and Venezuelan artist Noemi Marquez, as well as American artists, e.g., David MacDonald (his work, “Untitled Plate” is pictured below) and art potter from Syracuse, Adelaide Alsop Robineau (1865-1929). 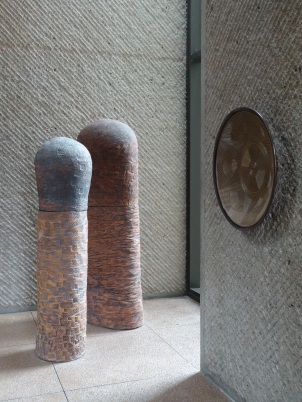 Adelaide Alsop Robineau (1865-1929), American potter, painter and ceramicist, in her studio with ‘Scarab Vase (The Apotheosis of the Toiler)’, 1910, porcelain, in Everson Museum of Art, Syracuse, NY. Image courtesy http://www.veniceclayartists.com

Temporary exhibitions change several times a year at Everson; I saw “Works on Paper” by American artist Sarah McCoubrey (from 10 May 2014 through 24 August 2014).  McCoubrey refers to the surreal landscapes of Salvador Dali or even to the work of 16th century painter Hieronymous Bosch with ink and gouache drawings of potatoes transmuted into “mystical contraptions built to coast above the earth or journey along the desolate landscape“.

Skilfully drawn images of tuber transport are in turns whimsical and slightly unsettling… hilarious… they remind me of another favourite, the large-scale unpeopled landscapes of Nobson Newton by Paul Noble. 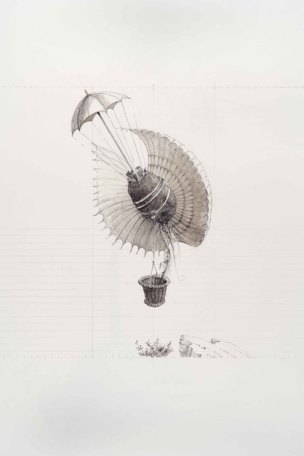 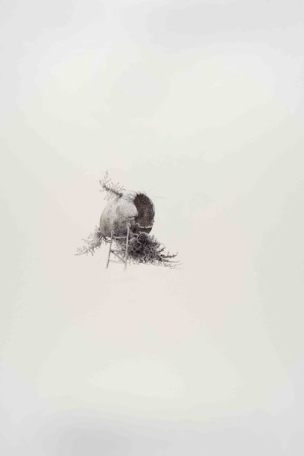 McCoubrey’s exhibition ends with an apropos of nothing work called “Woman with a Bucket on her Head” which made me smile and with that, it was time to go.

About Everson Museum of Art

Everson Museum of Art in Syracuse, NY was designed by Chinese-American architect I.M. Pei in 1968 (who also put up those glass pyramids at the Louvre).

The structure is sculpted over three levels, with a large plaza behind the building where visitors can enjoy pools with fountains adjacent to several large-scale works of art. The Everson is also runs art courses from practical hands-on classes, museum tours to visiting artist lectures and talks.

And of course, no art museum of any stature is complete without a Henry Moore piece somewhere on site; at Everson, one of the many Moores in the USA is located prominently at the entrance.  Lastly, another little bit of trivia for Londoners: nearly identical to the one in Syracuse, “Two Piece Reclining Figure: No. 3” can also be found in London at Brandon Estate.

More links and information about Everson and Sarah McCoubrey