Hetain Patel examines his ‘relationship with the domestic’ with a fresh approach to his work in an exhibition that includes films, photography and animation, at The Pumphouse Gallery in Battersea from 7 February until 30 March 2014.

Produced by New Art Exchange in Nottingham, Hetain Patel’s latest show explores “domesticity” in the context of his own family as well as that of the exhibition location, in this case, the Pumphouse Gallery in Battersea Park, Southwest London.

Spaced over four levels, the exhibition begins with two animated shorts, ‘God is a DJ’ (2014) and ‘Maestro’ (2014) both accompanied by music soundtracks. The first shows Patel’s mother making chapattis and the latter highlights an ordinary day-to-day activity of a Wandsworth mother Jelena folding laundry. 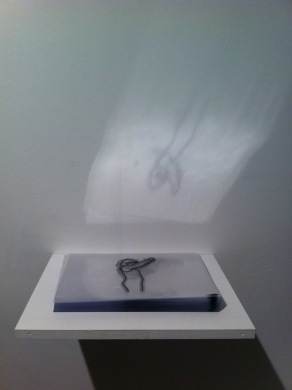 Going up to the next level is a room with five screens each showing Patel’s grandmother conducting her daily prayers on consecutive days, the same ritual she has enacted for her whole life of almost 100 years.

On the 2nd floor, viewers encounter two short films, each about 6-7 minutes long, “To Dance like your dad” (2009) where Patel copies his father’s movements in the workplace (a factory) and recreates them as a sort of choreographed performance in a dance studio.

“The First Dance” (2012) is the second film, which re-stages a scene from Ang Lee’s “Crouching Tiger, Hidden Dragon”, doing so in South London where Patel and his wife live.

Finally, on the top floor is a collection of photographs by Patel which show portraits of himself and his wife in household situations, in which the artist “attempts to frame his life with hers” and depicts the ongoing collaboration between the two partners.

Patel is known for his work around authenticity and identity, often through self-portraiture. In this show, the artist has expanded his focus from solely himself to include his family into the work as he “question[s] the means of identity and cross-cultural integration”.

In “At Home”, Patel “excavates history and merges his family traditions, domestic life into a fantasy world separate from stereotyped symbolism” by “crossing the boundaries of heritage and popular culture” It seems to me that Patel is quite successful in leading the viewer “to consider a world that celebrates integration instead of highlighting material differences. ”

“What’s your best advice?” – family art workshop at the Pumphouse

Every Sunday (12 noon – 4pm) at the Pumphouse, the exhibition includes free family workshops of various themes, open to all and appropriate for all ages.

On the day I visited the Pumphouse, I happened to join a workshop called “What’s your best advice?” in which visitors had the chance to write down and exchange bits of helpful counsel to each other. The kids (and adults, too) seemed to enjoy it, and it was a lovely conclusion to my visit to the Pumphouse.

Reviews of Hetain Patel’s ‘At Home’

Exhibition details: “At Home” is on at the Pump House Gallery, Battersea Park, London, SW11 4NJ from 7 February through 30 March 2014, with opening hours Wednesday to Sunday 11am – 4pm. Free admission.