London’s annual Sculpture in the City is back again with 20 new large-scale public artworks dotted around the capital’s centre, providing a breath of fresh art on a lunch break or even a good reason for a weekend ramble in the business and banking district. Free to the public, ends 2017.

The City of London becomes an “urban canvas”

18 artists present public artwork in 20 locations in centre of London in an “urban canvas” that is Sculpture in the City 2016. These 17 works include the expected large-scale constructions of steel, stone, or bronze, as well as a few more unconventional pieces such as a “magic” lamp filled with whirring faeries (sorry, no wishes granted here)…

and Lizi Sánchez’s set of childlike paper rings (which are, in fact, much heavier than they first appear as they are fashioned of lead).

Among my favourites were the enormous golden gourds by Sarah Lucas, introduced by their Christian names (although I’m not sure which is “Florian” and which is “Kevin”)…

Many of the 17 artworks of SITC 2016 are located within the 2-3 block radius around The Gherkin, all within easy walking distance of each other, making for an especially pleasant ramble in the weekend when the City goes quiet. Iconic city architecture and sunny weather forms a dazzling theatre for these installations, yet there is still space to contemplate a deeper message; Giuseppe Penone‘s “Idee di Pietra – 1372 kg di Luce” with rocks perched like weighty eggs only just balanced in the leafless branches, the whole thing planted in the middle of the banking and business district, seems to lampoon the corporate environment surrounding it. Nearby, “Laura” by Jaume Plensa appears to quietly meditate in the shadows as if seeking repose from the single adjacent tree.

And then Huma Bhabha’s “The Orientalist”…at first, the spitting image of a king or a learned man, someone to revere, to look up to, upon closer examination is structured on chicken wire and Styrofoam before being cast in bronze, thus preserving and exposing every one of this man’s flaws and broken places for all to see.

A number of the artworks seem to allude to playing pieces, as if the City of London is a life-sized Monopoly game where goods and services are bought and sold, money changing hands every minute… or even, Benedetto Pietromarchi’s “Of Saints and Soldiers” made me think of pawns in game of chess. 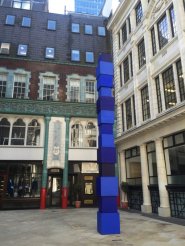 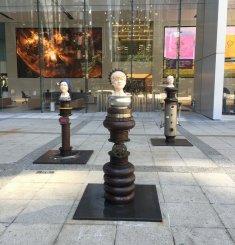 Benedetto Pietromarchi, ‘Of Saints and Soldiers’, 2016, in Sculpture in the City 2016, London. Photo credit Kelise Franclemont.

And then I came upon this desperately exhausted-looking fellow with the appearance of one who has lost everything…or maybe, he simply hasn’t yet reached his potential. Sometimes all anybody needs is a couple of arms, a helping hand, and another leg up to get over that wall. Hang in there, guy, you’ll make it! Someday. Eventually. 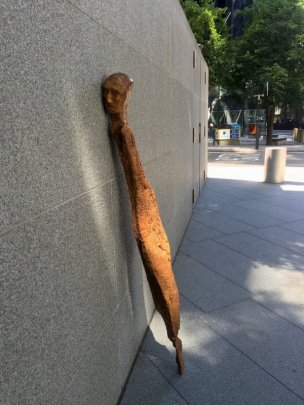 Sculpture in the City as in previous years, again presents their Education Programme in conjunction with the art display. Run by Open City, SITC Education Programme “offers exciting opportunities for young people to engage with the City of London…working with artists, architects and volunteers, students from eight local schools participate in workshops that explore and creatively respond to the public spaces, buildings, and sculptures.” A number of free workshops, community events, and tours are scheduled this summer, including:

This year, the sculptures in SITC 2016 can be found on an interactive smartphone app called “SMARTIFY” through which visitors can scan images of the art learn more about it and the artist who made it – and join their friends in talking about art on social media (Facebook, Twitter, and Instagram). While the app can add to your experience of the art, you certainly don’t need it to enjoy SITC.

Sculpture in the City is a public event to look forward to every year from a group of international artists that enrich the City of London with surprising, diverse, and interesting works, in a project that combines creativity with a bit of a scavenger hunt that can be enjoyed by Londoners of all ages. Summer is finally here so what are you waiting for?

Read more about SITC in London