The Institute for Contemporary Art, London, presents ‘Whose gaze is it anyway’, in a collaboration with Arab British Centre and curated by Omar Kholeif from the Whitechapel Gallery, who puts together a multimedia display of film memorabilia and video works by contemporary artists allowing viewers to examine an aspect of Arab pop culture from the 30s to present day. The exhibition is open until 5th October.

Arab pop culture summarised by films of the 70s?

It’s not an exhibition of old film posters from Egypt without the belly dancers, for sure…

The various images of shimmy-shakers didn’t surprise me, although I have to say I wasn’t expecting to see vintage adverts for 40-year old movies of a more lascivious nature. If I infer accurately from the posters selected by curator Omar Kholeif, it would seem that back in the 70s the Middle East was rife with hordes of Succubi with their feminine wiles, intent on seducing hapless men into their lady love nests…

The couple of dozen vintage film posters were interesting to look at, and of course I know better than to assume that every alley-way of Cairo back then was chock-a-block with free-loving half-nude hippies, although I have to agree with Tabish Khan’s (The Londonist) comment that  “it would be helpful to have a synopsis of each movie next to the items on display [in order to] give them cultural context”, especially for those of us not born and raised in Arabian lands.

I also would’ve liked to have somewhere to sit though to watch the movies playing on the two monitors, as they looked to add much to the exhibition, even when at first glance they just seemed to be reruns of old Egyptian movies.

The two video works were actually from contemporary Middle Eastern artists; the first by Maha Maamoun, “Domestic Tourism II” (2009, approximately 1 hour) which seeks to explore these millennia-old artefacts acting as “nostalgic symbols” in Egypt’s tourist industry, which in Maamoun’s films are “re-appropriated from the ‘timelessness’ of the tourist postcard and re-inscribed into the complex political, social, and historical moment in urban narratives”. 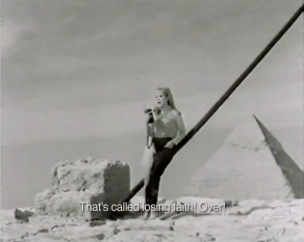 Maha Maamoun, screen capture from ‘Domestic Tourism II’, 2009, Single channel video, 1:56, in ‘Whose gaze is it anyway?’ at the ICA, London. Image courtesy the artist from vimeo.com 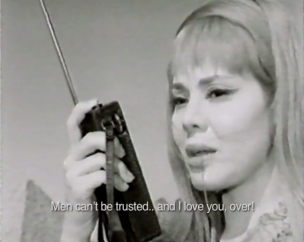 Maha Maamoun, screen capture from ‘Domestic Tourism II’, 2009, Single channel video, 1:56, in ‘Whose gaze is it anyway?’ at the ICA, London. Image courtesy the artist from vimeo.com

The second video, “Disco” (2010, about 5 minutes) by artist and musician Raed Yassin is a story of “abandonment, longing, and stardom” about Yassin’s father, who deserts his family to seek fame and fortune working in Egyptian horror films.

Opposite the videos is a wall including sketchbooks and a proposed movie poster, dedicated to “Qatarican”* Sophia al-Maria‘s as-yet-unmade thriller, “Beretta” about a woman in Cairo who seeks revenge for rape.

*al-Maria’s own term to describe herself: American-born, and her family is from the Gulf nation of Qatar 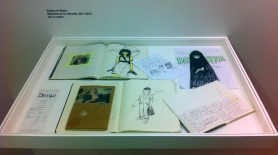 Sophie al-Maria, sketchbook for ‘Beretta’, 2011-2014, ink on paper, in ‘Whose gaze is it anyway?’ at the ICA, London. Photo credit Kelise Franclemont.

Adjacent to the “Beretta” display was a short looping video on an iPad, also by Sophia al-Maria, entitled “Rape Gaze“. In three minutes, the screen repeatedly zooms in on dozens of what she describes as “misogynistic Egyptian movie posters from the 70s and 80s”. The images are disturbing enough in the full view, then become more so as some particularly insidious corner of each is carefully highlighted by cropping out the rest of the picture to centre around the abject fear in her eyes, a threatening knife at her throat, the creepy stalker guy just behind her. Not to forget these were films people paid to see… despite the marketing images being so discomfiting, I found it hard to tear my own gaze away, thus implying the complicity of the voyeur into these brief glimpses of violence.

So for the question, “Whose gaze is it anyway?“, this exhibition is just a taster for this year’s [2014] Safar film festival of popular Arab cinema, sponsored by The Arab British Centre and held at the ICA, which starts from 19 through 25 September 2014. Perhaps some answer could be found in one of the 10 feature films and three shorts from Morocco, Lebanon, Egypt, Algeria and Palestine included in the festival, or within the forum of lectures and panels on 20 September 2014.

Now the question becomes, how many of these films can I fit in my calendar? 🙂

Exhibition details: “Whose Gaze is it anyway?” is on at the Institute of Contemporary Arts, The Mall, London, SW1Y 5AH from 2nd September through 5th October 2014. Free admission with Day Membership (£1) or regular ICA membership; step-free access.