The work of seven women comes together in “My Sister Who Travels”, an exhibition of six contemporary artists, each of whom uses the lens as her primary medium, plus a collection of archival photography by archeologist Esther Boise Van Deman, dating from early 1900s. Curated by Martina Caruso, ends 30 August 2014.

Focus on the Mediterranean as a region of memory

Often called “the cradle of modern civilisation”, the Mediterranean Basin has flourished with human activity for around 10,000 years. Today, this area around the sea connecting Europe with the Middle East and North Africa, is “…a region of memory, conflict, colonisation, migration, emptiness and expanse”, noted by Amelia Smith in her review of ‘My Sister Who Travels’, a recent exhibition at The Mosaic Rooms, London. The exhibition is made up of the work of six contemporary artists and one Victorian archeologist, installed in three rooms over two floors, in which all the artists are women, and each uses the camera as her principal mode of practice.

As the contemporary artists examine the effect of post-colonialism on territories that border the Mediterranean, in the centre of the exhibition, the visitor will find a wall of 100-year-old photographs of ancient civilisations by Esther Boise Van Deman, a prominent American archeologist in the early 1900s. Van Deman’s work focused on studying the building materials and construction of historic sites, with a particular interest in Roman architecture, and her archival photos are echoed by the lovely Victorian decor of the main space at The Mosaic Rooms.

Another artist who looks at how the gaze of a particular region may change over time is Paola Yacoub, a Lebanese photographer who captured views of South Lebanon, which may resemble Romantic paintings of the 1800s; however, the areas she photographed were at the heart of the Lebanese civil war (1975-1990), and were utterly destroyed during that conflict. Today, they retain almost no glimpse of their embattled past.

As a way of examining both the overlapping geographical features as well as shared human history of Spain and North Africa, in “Imported Landscapes” (2010), Corinne Silva hires billboards, 8 metres wide by 3 metres high, and places snapshots of Morocco within the landscape of Murcia in southern Spain.  Silva writes about the project,

The billboards are a reminder that landscapes themselves are palimpsests.

She continues, “Each person’s actions directly affect another…placing the southern hemisphere into the northern…creates a space to contemplate not only their shared topography but also the complex web of their ongoing connection of trade, mobility and colonization.”

Senior Research Fellow at University of the Arts – London, Iraqi-born Jananne al-Ani gives the viewer an unconventional view of Jordan’s countryside in stills from “Shadow Sites II”, a pair of films captured with a camera attached to an airplane. From the “Aerial” series also recently shown at Hayward Gallery Project Space (2014), these ghostly images are “glimpses of human civilisation” and expose what al-Ani deems as the “Orientalist stereotype of the region firmly embedded in the West’s consciousness…that of a desert, a place with no history and no population”. 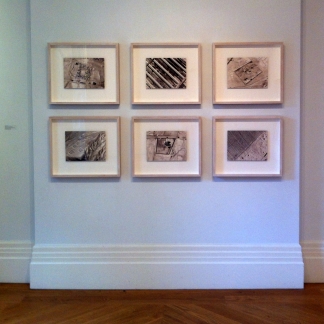 The first of two film-based works is by Algerian artist Halida Boughriet entitled “Transit” (2010), capturing in sepia-tones what the artist calls “moving photographs” in the mesmerising ebb and flow of a flock of swallows over an unidentified town. Perhaps the lens is pointed at somewhere in France (the narration is in French) and although the camera doesn’t move, the overheard conversation seems to follow the migration of the swallows, here there and nowhere in particular. As Boughriet writes on her website, the film meanders along “human narratives of movement…to political inequalities between the Global North and Global South“.

The second film work in the exhibition is by Palestinian artist Noor Abed, entitled “We Both Know” (2013), and depicts the artist picking her way over a golden stony hill with a life-sized mannequin strapped incongruously to her back. Speaking about the film, the artist describes her body as “a colonised one” and further describes the landscape she is climbing as “…mapping the movement, while the woman is carrying this heavy burden for no specific reason and in an unsettling way.” The woman and her unwieldy load eventually scrambles out of frame, to come back again somewhere from the other side, in an endless loop; the scenario is amusing until the realisation: unless the power button on the projector is switched to “off”, the woman and her burdensome dummy will be powerless to escape the dusty, rocky hillside.

One thought on “The lens is the medium for 7 women in ‘My Sister Who Travels’ exhibition – Mosaic Rooms, London”