Visitors to the Threadneedle Prize 2013 in London on 2 and 3 October 2013, may find models posed as popular film characters for two free Big Draw events, sponsored by Mall Galleries and supported by Royal Institute of Painters in Water Colours and Royal Society of British Artists. Over 200,000 people are expected to participate in The Campaign for Drawing’s “Big Draw” events, which run from 1 October through 3 November in 15 countries.

I originally popped into Mall Galleries to view this year’s Threadneedle Prize for Painting and Sculpture – and walked into a circle of 30 or so people at easels, sketching a pair of models in the centre. This  turned out to be one of The Big Draw sessions organised every October by Campaign for Drawing, a charity aimed to raise awareness and use of drawing for teaching, therapy and well-being.

Campaign for Drawing “…sees drawing as a basic human skill useful in all walks of life…[their] work will finish when the words ‘I can’t draw’ are dropped from [human] vocabulary.”

Because I always carry my sketchbook in case of random ideas or access to free models, at the next break, I joined in to draw James Bond himself and what I can only guess was a 1920’s flapper in a gold dress with black fringe (which 007 movie was that again?).

After a brief scribbling session, I wandered around the Threadneedle Prize exhibition looking to exercise my voting privilege to select the Visitor’s Choice Award, worth a prize of £10,000 to the winner. 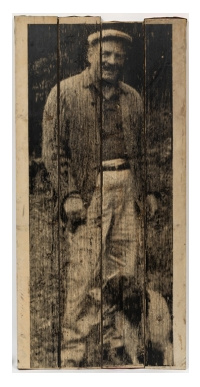 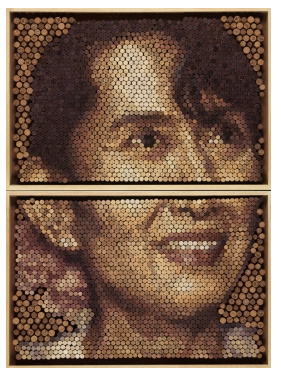 Thought it didn’t win a prize (it wasn’t even shortlisted!) the giant textile piece of the cockfight stood out from the rest. For me, it was one of the strongest works there; first of all, it reads as a painting without using brush, paint or canvas.  What I liked best about this work is the Shehrezade-meets-Grayson Perry rendering in which the artist seems to comment on current Iranian politics with tapestry language from the Golden Age of Persian art. With two, errm, roosters going at it like that, she could be referring to any pair of world leaders at the moment. Another point of note – the hens aren’t doing the fighting; they aren’t even in this picture – yet through the traditionally feminine past-time of needlework as a medium, the artist has deftly included women in the historical narrative.

Exhibition details: The Threadneedle Prize for Painting & Sculpture is on at Mall Galleries, The Mall, near Trafalgar Square, London SW1 from 25 September through 12 October 2013. Free admission.