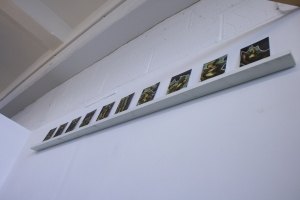 What do you see?

A row of 10 cards, postcard-sized, are arranged on a very narrow shelf high about the viewer’s head.  On each postcard is a strange, distorted image which may be quickly recognised as an image of the Mona Lisa.  The artwork is installed in a white space, clearly alluding to a formal gallery space.  The work is entitled “postcards, 6 for 5”

The title refers to a discount deal one can get when buying postcards (e.g., buy 5 you get one for free). The cards themselves refer to the Mona Lisa (one of the most famous/recognised artworks in the WORLD), and thus refers to art history, the aura of the artwork, the “art world”.

The arrangement/order of the cards is horizontal, random and very high above the user, which is somewhat inaccessible due to the height, and also the images themselves are inaccessible due to their distortion. The images can not be seen clearly or easily.  The height also speaks to elevation (of art, of ideas about art), i.e., making these cards/artworks important or special. The cards themselves are also not actually for sale, again making them inaccessible.

The arrangement/display of the cards is specific and important — high above the viewers head/eyesight so as to indicate the art object is elevated, high, perhaps even implying the artist’s ideas are elevated, “better” and inaccessbile at the same time. The distorted image could be read as “mystification” (Berger) of the art object, and perhaps frustrating the viewer’s understanding/ engagement on purpose.  The squidgy white border around the distorted image belies its postcard origins.

I thought about printing out the poster-sized image, and also thought about painting the distorted image in oils (and thus refer back to art history, tradition of oil painting).  Then I realised for this to make the most sense, the objects/artworks had to be reproduction postcards of a postcard reproduction of the most famous artwork in the world, achieving a somewhat circular reference.  Then the display fell into place; I had considered eye-level (as in a gift-shop) but higher than eye level made more sense instead, because I wanted to say something about how world has gone a bit crazy if a few cheap postcards in an art gallery is suddenly “high art” — making the art object no longer primary.  The idea has become the thing bought and sold for a premium. (commodification of art).

This one’s about the commodification of art, which sometimes seems to me to a main continent in the fantasy world where ideas can be bought and sold for exhorbitant prices.  How do these artworks maintain their value and worth? (hence the 6 for 5 idea; maybe the value of an artwork is in what’s given away for free).

I’m also questioning how much (to what degree) does craftmanship/skill play in determining an art object’s value (financial, cultural, intellectual), especially when craft/skill sometimes seems given over to the “wrapper” of the art object, such as marketing, branding, and provenance.  It’s these three things that more often these days seem to play a strong part in making something a[n important] work of art, while craft/skill and the content take a back seat.

I guess a lot of art nowadays is where you hang it and what you say about it, rather than solely containing its own intrinsic value.