Although I carried a camera, too, an iPad loaded with the app Brushes served as my sketchbook for my first visit to Venice Biennale 2011 and here are a few of those pages from my digital “journal”…

Out and about in Venice

In a bar in Rialto area, my friend B—— and I met a couple on honeymoon. Their names were Paula and Jeff, claiming to be two pirates from San Diego. Maybe they weren’t really pirates though; that could’ve been one of those things people say to try and seem impressive.

Can’t remember the exact details now but we talked about Pink Floyd, wine, and… pirates. Or was it sailing. I think it was both… Anyway, Paula and Jeff like sailing, and contributed their signatures and the smaller sailboat to this drawing. The larger sailboat was added by B——. 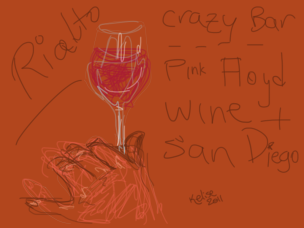 B—— and I later had a lovely quick meal at a little place called Jazz Pizza. A tuba was hanging from the ceiling, so that explains the jazz (we ate the pizza).

Shortly after breakfast (our server Elisa corrected my spelling of ‘colazione’), we headed to the Biennale.

Some impressions from Venice Biennale 2011 – Giardini and Arsenale

We started our tour with Giardini (Gardens). The first work we encountered was “Notes and Queries” in the Spanish Pavilion, a protest/performance/installation/interactive piece by Dora Garcia.

Also wandering around was a woman who approached various viewers, look him/her in the eye and would narrate everything she witnessed in a soft, gentle Spanish… Eg, about B——, something about there’s a woman, and she’s looking thru her bag, and now she’s taking out her notebook, and her pen… Then she started with me…”a woman, opening her bag, pulls out a case, to write/draw on her iPad…”

This sketch is of one of the performance artists whose role was to type in everything he saw during the hours of the exhibit. These manuscripts were then printed out in thick spiral-bound books, which anyone would flip thru and read (English, Italian and Spanish versions).

Then the Belgian Pavilion, with Feuilleton – The Seven Capital Sins by the artist Angel Vergara. It was an installation that mixed film and painting (or rather, recordings of the act of painting). The films were projected and then, the artist painted over top the film as it rolled. Then the sheets of glass were installed in the wall as paintings in their own right.

Only, a whole final piece could never be seen… Ie, the films showed the act of painting over the film, but the paint wasn’t actually ON the film itself. You could then see the paintings themselves, but never the real paint over the reel film…you could only see the painting alone. Does that even make sense…

The films were images and sounds from a variety of news sources…Berlisconi gets Punched, Obama, Col Qaddafi making a speech, etc. All old news with possible references to Cy Twombly, Jackson Pollock, and current politics.

Anyway, here is my digital rendition of one of the Angel Vergara’s paintings seen in the Belgio Pavilion…

The most interesting piece in the Israeli pavilion was this “Salt Bridge” from Sigalit Landau. In this work, the artist proposes to build a salt bridge to connect Jordan and Israel. The image above is a sculpture related to this project, a green net congested with salt and draped over a white frame. This is my view looking up, as up to a stage, sitting on a small bench. Possible references, Eva Hesse, land artist Richard Long, politics and geography of the region.

The work had such a PRESENCE…a WEIGHT…

Windows, Trees, and Inbetween by Swedish artist Andreas Eriksson. A lovely, aesthetic use of the space… Very different to many of the other politically-charged works, this felt gently environmental. I thought of David Nash.

All the noise was coming from the USA Pavilion, which was a huge installation/performance of a Centurion MK3 tank upside-down, with a runner using the tank’s treads as a treadmill.  It was called ‘Track and Field’ (2011) by the artist collective/group: Gloria (artists: Jennifer Allora, Guillermo Calzadilla). WHAT A RACKET!

On our way to Arsenale, we stopped for a cup of coffee.

This was my favourite piece in the whole Biennale: Haroon Mirza’s “The National Apavilion of Then and Now” (in Arsenale). When the light went out, the viewer would get these purple halos…

There were these super-kitsch lighting fixtures in our hotel room… I loved and hated them. No, I loved them…